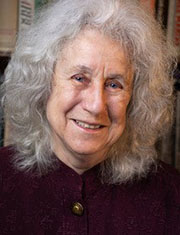 Catherine Maiorisi lives in New York City and often writes under the watchful eye of Edgar Allan Poe, in Edgar’s Café near the apartment she shares with her partner, now wife, of thirty-eight years.

In the seventies and eighties while working in corporate technology then running her own technology consulting company, Catherine moaned to her artistic friends that she was the only lesbian in New York City who wasn’t creative, the only one without the imagination or the talent to write poetry or novels, play the guitar, act, or sing.

Since she found her imagination, writing has been like meditating for Catherine and it is what she most loves to do. But she also reads voraciously, loves to cook, especially Italian, and enjoys hanging out with her wife of thirty-nine years and friends.

When she wrote a short story to create the backstory for the love interest in her two unpublished NYPD Detective Chiara Corelli mysteries, Catherine had never read any romance and hadn’t considered writing it. To her surprise, “The Fan Club” turned out to be a romance and was included in the Best Lesbian Romance of 2014 edited by Radclyffe.

Another surprise was hearing the voices of two characters, Andrea and Darcy, chatting in her head every night, making it difficult to sleep. Reassured by her wife that she wasn’t losing it, Catherine paid attention and those conversations led to her first romance novel, Matters of the Heart.

Catherine has also had two mystery short stories published in the Murder New York Style Anthologies, “Justice for All” in Fresh Slices and “Murder Italian Style” in Family Matters.