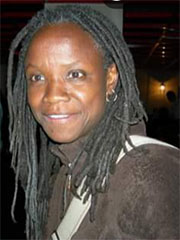 Regina Jamison has enjoyed the magic of paper and pencils and stories from a very young age, but she began taking a career in writing seriously after watching an episode of her favorite nighttime television series, Family, in which her favorite character, Buddy Lawrence—played by the actress Kristy McNichol—posed the question: How will you leave your mark upon the world? Regina decided she would leave her mark on the world via her writing and earnestly began writing stories and poetry.

At the age of twelve, Regina’s poem, “Being Myself” won first place in the New York City Citywide Poetry Competition in the sixth-grade division. Years later, in the first issue of a small zine called Clamour created by Renee Gladman, Regina’s poem “Bin Around” was published. This marked her first publication in a varied list of publications.

Regina’s poetry has appeared in print in the following magazines and/or journals: Off the Rocks: An Anthology of GLBT Writing Vol 14 & Vol 15, Sinister Wisdom: Black Lesbians We are the Revolution, Five 2 One, Promethean, Poetry in Performance 43, and Magma Poetry: Deaf Issue.

Regina is a 2014 Lambda Literary Fellow and a residency recipient at the Woodstock Byrdcliffe Guild. She was a featured reader at Calypso Muse Poetry and Fiction Workshop and at Women Writers in Bloom. She received her MFA from City College in New York.