Karin Kallmaker: Why Louisa from Touchwood Would Love Gentleman Jack 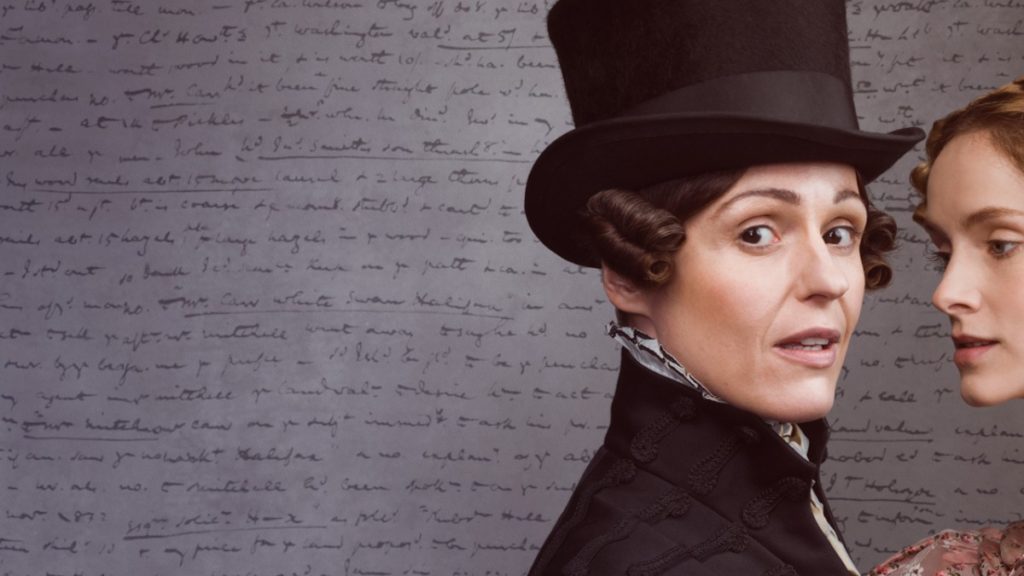 Was it audacious for a 29-year old (that would be me) to write about a love story for a woman her age and a woman in her mid-50s? The age-gap romance didn’t yet exist in lesbian fiction, at least to my knowledge.  My only literary model would have been Jane Eyre. I blithely ignored the pitfalls a more mature writer would have foreseen and wrote the story I wanted to see in the world.

And now, my reality is that I’m older than both of the women in Touchwood. Not a situation I ever envisioned, though it was going to happen. For the record, I prefer it to the alternative, of course.

Quick refresher: Touchwood was my second novel, written circa 1989-90, and published in 1991. It features openly lesbian Rayann, 29, and long-closeted Louisa, 56. Passion between them is a big surprise to both, but that’s the easy part. Their families are outright opposed to the relationship. Their closest friends are also not on board, and the gay community, busy fighting for visibility and inclusion, is not great at practicing what it preaches.

When I was working on this new edition —  cosmetic changes, modernization of grammar, and eliminating 600+ uses of “she said” — I was happy that I’d done justice to the vibrant self-made community of the early Gay 90s, warts and all. The younger character, Rayann, still felt real to me, especially given the rising feeling that the world was about to change in huge and positive ways.

Louisa, oh Louisa, I fell in love all over again. My research into the 1950s world that made her the woman she is in the 1990s holds up (at least I think so), even after all these years. Where I may have not been quite right was what it actually feels like to be post-menopausal. There’s no bottle of ibuprofen at hand, she’s not suddenly mopping her entire body while sitting in front of a fan, and she doesn’t have days where “I slept funny” causes a backache, limp, and a strong desire for adult beverages at lunch.

What I began wondering about, though, was what in today’s world would excite Louisa? That is, aside from streaming baseball games and large screens to watch them on. She’s a strong, independent butch woman who survived a small town that didn’t want her to exist.

Then it hit me. Louisa would have binged season one of Gentleman Jack, with another rewatch planned for the holidays as a run up to the second season.

Louisa’s bookstore will, of course, have stocked Female Fortune: Land, Gender and Authority: the Anne Lister diaries 1833-36 and all the other authoritative histories of Anne Lister. She would have read them all too. The restrictive world that Louisa grew up in had plenty in common with Lister’s — she would have understood Lister’s survival dance of outer compromise and inner steel.

I can picture Louisa dabbed away more than a few tears at this highly acclaimed historic drama, centered on a real woman’s story — an unapologetic woman who intended to resist the limitations the world put on her sex in any way she could find.

Dancing with Rayann to this jaunty tune would have soothed Louisa’s memories of the gender-defying women in her own past who’d been beaten, cast out of families, and jailed for not wearing three articles of women’s clothing.

One way to change history is to tell our stories. For ourselves and our children, and for the ones who survived it.

Karin Kallmaker’s second novel is now available in a 30th Anniversary edition which includes a foreword by the author and a short story. Touchwood and her latest novel, Simply the Best, are both available from Bella Books. Karin has written of over thirty novels, and has always written about women who love women and isn’t likely to change. Her addiction to TimTams, coffee, and Taytos won’t likely change either.